by Eric B. Olsen 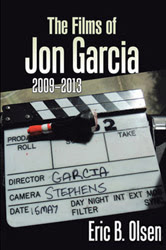 The Films of Jon Garcia: 2009-2013 is about the zeal for making motion pictures that informs the kind of work that goes on in the Portland film community every day. Most of the people involved in these independent projects aren’t looking for money; they are looking for an artistic outlet that they can’t get anywhere else. And regardless of what winds up on the screen, there has to be a certain grudging praise for artists who are able to realize their visions despite all of the factors working against them. Portland writer-director Justin Koleszar put it this way: “To be honest, I really hope that people can, if nothing more, just appreciate that the film was done well. It’s not going to be everyone’s favorite, but I hope that they appreciate the performances of the actors and all the work that went into it, the entire cast and crew.” In the context of the kind of sacrifice that goes into an independent feature in terms of finances, time, and effort, it’s not an unreasonable request, and a sentiment that I’m sure every independent filmmaker shares.

After discovering Jon Garcia’s film The Falls in my local public library, I started watching other films that featured the two stars of Garcia’s films, Ben Farmer and Nick Ferrucci. It was then that I began to realize just how many terrific films had been made in Portland in the past decade, and had it not been for accidentally stumbling across The Falls I might never have know about them. They are independent films, to be sure, and certainly suffer from the severe budgeting restrictions that come with young filmmakers struggling to realize their vision. But one thing that can’t be restricted is artistic vision itself, which can be seen in the narrative quality of their work that sets it apart from much of the independent filmmaking happening in the rest of the country.

My initial concept for the book was an ambitious one. I had identified a dozen films by eight different directors and planned to spend the majority of the text dealing with my own analysis of the films, using the interview material to supplement and add dimension to that analysis. But it soon became clear that I was going to have to limit the scope of the project, and maybe do just a few films or directors at a time in multiple volumes. The choice for the first volume in the series was equally clear. Of all the directors I had interviewed, only one had made more than two films, and that was Jon Garcia. In fact, one of the things that became abundantly clear about him throughout my research is that he really is a filmmaker. His ability to write screenplays, his vision as a director, and his determination to continue to make films of high quality despite the necessity of low budgets, has set him apart from most other independent filmmakers.

The book itself is also somewhat unique in the way that it is written. I have read numerous books on film and the history of cinema over the years and while they deliver a lot of good information and historical background, I find most of them wanting in the way that they approach their material. What most of these books lack is a cohesive narrative in which all of the elements of a film—history, interview and analysis—occur simultaneously in the text. This is the kind of book about film that I’ve always wanted to read, so it’s the kind of book I decided to write. The book examines the first four films of Garcia’s career in order to provide a deeper understanding of works that transcend the limitations of independent filmmaking and to show how they have attained the status of art. Part oral history and part film analysis, it provides a detailed textual commentary on Tandem Hearts (2010), the director’s first film, The Falls (2011) and The Falls: Testament of Love (2013), his most well known films, and The Hours Till Daylight (2016). The Films of Jon Garcia: 2009-2013 takes an in-depth look at a writer-director who has earned a reputation as one of the Pacific Northwest’s premier filmmakers.

Posted by neslowe at 8:32 AM No comments:

neslowe
E.B. Neslowe is an independent film analyst and reviewer. He currently lives in Seattle, Washington.